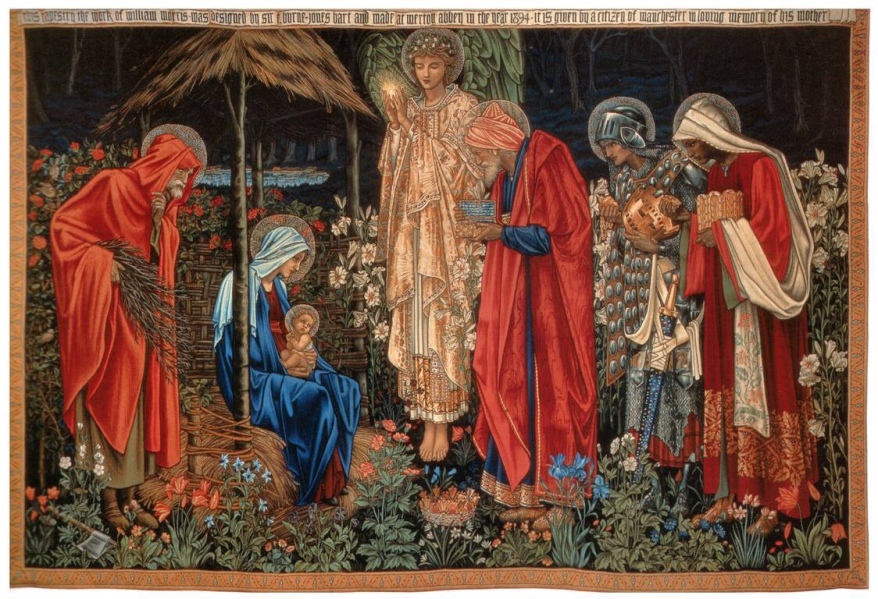 Today is Epiphany Sunday. The word, Epiphany means manifestation (of God), and marks an encounter with God. On January 6th—or the Sunday closest to it—we celebrate the fact that God showed up to eager, Gentile Maji who had traveled hundreds of miles to see and worship Him. These were the 1st non-Jews to come adore the baby Jesus.

Their visit to Bethlehem represents the fact that the birth of Christ was of momentous significance to all people of the world.

A friend told me recently a story of a children’s Christmas Pageant: Young children portraying Joseph and Mary, and a doll for baby Jesus were seated center-stage. Some shepherds and kids dressed as sheep entered from the left and said their lines. But when the 5 year old kings arrived, they developed stage fright and froze in their tracks. Four year old Mary knew what they were supposed to do, and being a bossy little thing, yelled out, “Just come over here and bring your gifts of gold, common sense, and fur.”

Our readings today all want us to realize that God the Father always intended Jesus to show up and be worshipped by all people—not just His Chosen Ones.

Matthew–intent on proving to the Jews that Jesus is their long-awaited Messiah–is the only Gospel-writer to include the story of the visit of the Maji (Matthew 2:1-12). Matthew doesn’t really clarify who they were, or where they were from. Tradition and song refer to them as “kings,” probably based on the 10th verse we recited this morning from Psalm 72 May the kings of Tarshish [Spain] and of the isles render Him tribute; may the kings of Sheba [Yemen] and Seba [Sudan] bring gifts. But the Greek historian, Herodotus, writes that the priestly caste of the Medes [Iran] were called Magi.

We can find mentions of magi also in the Old Testament books of Esther, Jeremiah, and Daniel. Jeremiah and Daniel both describe the Magi as wise and highly educated men who served in the Babylonian [Iraqi] court. They were the doctors, scientists, mathematicians and legal experts of their day. They were also well trained in astronomy, astrology, and magic (Daniel’s specialty was interpreting dreams, a gift from the Holy Spirit).

In fact, the Magi served as advisors to the king. In Daniel 2:48, King Nebuchadnezzar makes Daniel master of all his Magi. Perhaps Daniel, and the other Jews living among them, shared their faith in Israel’s One, True God with their Magi associates. Perhaps they also shared with them prophecies regarding the Coming Messiah. We don’t know for sure, but it is quite possible that they were familiar with the predictions from Numbers 24:17 A star shall come forth from Jacob (meaning Israel), and a scepter (indicative of a king’s rule) shall rise from Israel… and from Micah 5:6 But you, Bethlehem, in the land of Judah, are by no means least among the rulers of Judah; for out of you will come a ruler who will be the shepherd of my people Israel. These 2 passages foretold of a special star to mark a king being born in Bethlehem of Judea.

What we do know for sure is that the Magi came a great distance from the East, bringing gifts to Jesus. They followed a star that led them westward. And then that star supernaturally stopped and remained over the house in Bethlehem to which Jesus and Mary had moved. (After the census had been taken, many returned to their homes elsewhere, so the tight housing problem in Bethlehem opened up, allowing the Holy Family to move out of the stable.) As Matthew describes it, the Magi gifted Jesus with gold, frankinsense, and myrrh.

We really don’t know how many of them there were. Tradition cites three because there were three gifts: Gold for royalty; Frankincense, a fragrant incense used by priests in worship; and myrrh, a pain-killer and a substance used for embalming a dead prophet or king. Their gifts exactly match Jesus’ 3-fold ministries of king, priest, and prophet.

But since their arrival caused a big buzz in Jerusalem and they had no trouble getting in to see King Herod, there were probably more. Paintings from the 2nd-3rd centuries depict 4. Other ancient records cite 12. And, due to the prevalence of highwaymen and robbers who often attacked travelers in those days, they would have been accompanied by armed guards for protection, as well as servants and animal handlers. So surely more than 3 important guys on camels made the trip.

Matthew cites Isaiah’s prophesy, Isaiah 60:1-2 Arise, shine, for your light has come, and the glory of the Lord rises upon you. See, darkness covers the earth and thick darkness is over the peoples, but the Lord rises upon you and His glory appears over you! In chapter 59, Isaiah had predicted that the Redeemer would come to Zion (Jerusalem). But in chapter 60, he uses something unique to Hebrew writing called the prophetic tense. In this tense, the prophet appears to have moved ahead of his prediction, and writes looking back on it as if it has already happened. So, instead of “the Redeemer is coming,” he boldly asserts, “He has come.” Jesus is the glory of the Lord, as well as the light of the world. Even though the times are evil and dark, in His 2nd Coming, Jesus—the revealed glory of God–will also be the light source for the world. Revelation tells us that one of the final plagues God sends on a those who have not been raptured (the Church) or martryed (non-believers who come to believe during the 7 years of the Great Tribulation), in a last ditch effort to bring them to faith, the sun, moon, and stars will disappear. There will be no light at all. Jesus will overcome evil, once and for all, and will reign as the King of the Universe and Light of the World.

Remember, Malachai predicted (4:2) that The day is coming, raging like a forest fire. All the arrogant people who do evil things will be burned up like stove wood, burned to a crisp, nothing left but scorched earth and ash—a black day. But for you, sunrise! The sun of righteousness will dawn on those who honor My name, healing radiating from its wings. You will be bursting with enegy, like colts frisky and folicking (Peterson’s paraphrase of the Bible, The Message, p.1738). Spiritual darkness will be overcome by the Light (power and might) of Christ.

Verse 3 Nations [Gentiles] will come to Your light, and kings to the brightness of Your dawn. Gentile and Jewish believers will flock to Jerusalem to see and worship Jesus when He comes again. This will be the world’s greatest revival! Again, bear in mind that the Church will have been raptured/removed from earth into heaven. Of those who remain on earth, a large percentage of nonbelievers (60%?) will lose their lives during the plagues God will send to earth during the Great Tribulation. Those who will have come to Christ during the Great Tribulation, and who survive those dreadful times, will be the ones who flock to Jerusalem. They will come by land, sea, or air.

In what seems an exact preview of our Matthew passage, verse 6 says, And all from Sheba will come, bearing gold and incense, and proclaiming the praise of the Lord. These God-fearing, Jesus-loving folks will descend upon Jerusalem with gifts for Christ the King. Just as will the Magi at Jesus’ 1st Coming, they will bring gold and incense (perhaps frankincense?). But since there will be no more death, there will be no need for myrrh—and myrrh is omitted.

Paul, in Ephesians 3:1-12, calls himself a prisoner of Christ and the apostle to the Gentiles. He is writing to the Ephesian church from prison in Rome, jailed for preaching the Gospel. He wants the Ephesians and us to know that the Christian Church is a divine mystery–not in the sense of a who-done-it novel–but rather as an innovation of Jesus’, unknown and therefore not mentioned previously in the Old Testament. Furthermore, he asserts that Christ intended the Church is God’s method of reaching the Gentiles, both to demonstrate the love and the wisdom of God.

We demonstrate God’s love by being loving and grace-filled toward others. We demonstrate wisdom by believing in what God has revealed in Scripture and by sharing it with others. This is how we pass on the light of Christ.

Finally our Psalm is a prayer for the new King Solomon written by his father, King David. It is thouight that it was prayed at Solomon’s coronation ceremony. David prays that his son will so love justice and righteousness, that it will be as though Solomon’s rule will reflect the rule of God Himself. Originally, Solomon asked God for the gift of wisdom and he did rule wisely and well for a time, so much so that folks came from all over to hear him dispense wisdom in judgment. However, he later allowed his many pagan wives to influence him away from the Lord. Eventually and sadly, he appears to have abandoned the One True God for idolatry.

David also prophetically expresses his faith in the goodness of the coming Messiah. It is He Who will (v.8) rule from sea to sea and from the River [the Euphrates] to the ends of the earth. Jesus will be a righteous King. All kings of the earth shall bow before Him (v.11). And, (v.14) He will also rescue the needy and the afflicted from oppression and violence.

Aren’t we grateful for Jesus? As we begin the New Year, let’s be mindful of God’s gift to us in Jesus. We may not bring Him gold, frankincense and myrrh—or even gold, common sense, and fur—but we can give Him our hearts, our faith, our obedience; and our gratitude.